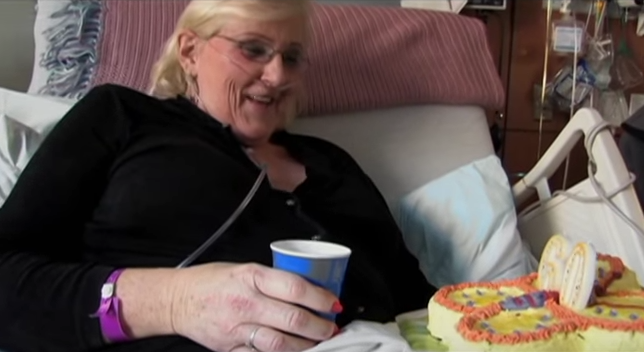 Krysallis Anne Hembrough was already considered dead by her family of origin after transitioning in her 50s—“it was horrible, it was vile,” she painfully recalls in the award-winning documentary film Gen Silent. “I paid a dear price for my transition.”

When she was subsequently diagnosed with terminal lung cancer, the abandonment by her family—including her estranged adult son—left her with no one to care for her in the final months of her life. Fear of discrimination made it difficult for her to accept outside help. “I won’t be comfortable with someone that’s not accepting of transgender people. I’d rather not have it done,” she says, preferring to go without needed care and treatment. Ultimately, a team of LGBTQ community volunteer caregivers is mobilized by a Boston-area hospice agency to provide the practical and emotional support KrysAnne needs. In her final months, she is not alone, but surrounded by people who care about her and celebrate her life.

Unfortunately, stories like KrysAnne’s are not uncommon. So many of us don’t know who will be there to support us at end of life. We are not prepared and are not experts in knowing what’s possible, where to turn. For LGBTQ individuals, these challenges are magnified, and many make the difficult choice to hide their sexual orientation and/or gender identity in order to get the care they need.

Although KrysAnne’s team did not formally include a trained End of Life Doula (EOLD), the help her team provided was very much like what an EOLD does. It illustrates the kind of support that practitioners of this growing professional specialty can offer.

EOLDs are committed to affirming the identities and choices of those they serve. Working alongside other caregivers, including hospice or palliative care professionals, and family members both chosen and biological, an EOLD is uniquely positioned to be a fresh and well-trained support person who will honor and help champion the dying person’s wishes. Hallmarks of the EOLD’s role are spending time with the client, helping to identify many types of needs, coordinating between caregivers and helpful community members, and educating about other community resources.

The key benefit that EOLDs offer is a singular focus on the client. Because their role is strictly non-medical, EOLDs can focus on other kinds of support that could help achieve a death that is in alignment with the client’s values and wishes. Although some EOLDs work through a hospice organization, the majority independently contract directly with the dying individual or their caregiver, based on goals and agreements developed with that individual.

According to the field’s professional Scope of Practice, an EOLD’s support is non-judgmental—EOLDs do not impose their values on the client, but instead are attuned to listen to the needs and wishes being expressed or, in some cases to help the client surface and express those needs and wishes, and empower them to fulfill them. While EOLDs do not speak for their clients, that can be strong advocates for what their clients want.

Most Americans say that they want to be cared for and die at home. But what is home, what is family, for someone who may have been forced to live outside of conventional definitions or been closeted for most if not all of their life? LGBTQ elders may not have a spouse or traditional family to care and advocate for them, or they may not be out in the care facility where they live.

Given these realities, culturally sensitive EOLDs can make a difference at this most important stage of life, and the dignity that an individual may have been deprived of in life can be provided at the end. As one of the advocates in the film Gen Silent expressed so well, “If we are saying come out and be filled with pride then it’s our responsibility to make sure that continues right through their last day.”

Merilynne Rush, MSHP, RN, BSN, owns The Dying Year Consulting where she trains end-of-life doulas, Advance Care Planning Facilitators, Home Funeral (and Green Burial) Guides and teaches about all things end-of-life. She can be reached at thedyingyear@gmail.com or through www.thedyingyear.com Merilynne co-founded and served as first President of the National End-of-life Doula Alliance, lives near Ann Arbor, Michigan and has received SAGECare USA certification.

Sylvia Sukop, MFA, MA, is a writer and faculty member at Washington University in St. Louis. Recipient of the Lambda Literary Emerging Writers fellowship, she has written extensively about LGBTQ life and community history, with essays in the Journal of Lesbian Studies, Creative Nonfiction, Huffington Post, and several anthologies. She is currently in training to become an EOLD. Her practice, Twilight Doula, focuses on serving LGBTQ end-of-life needs, including life review, legacy projects, and ritual creation. Contact: TwilightDoula@gmail.com